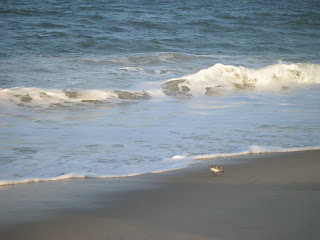 For the Lord God is a sun and shield; The Lord will give grace and glory; No good thing will he withhold From those who walk uprightly.  {Psalm 84:11}

As my husband and I walked last night, I was touched with the goodness of God. Through Jesus Christ, we have been given everything for life and Godliness. Grace is being given what you don't deserve, and without Jesus, God couldn't even look in our direction, but because of the greatness of God and his unmerited favor, He not only looks our way, but He desires greatly for us to know Him.

There once was a King, who took in a little girl who had no place to go. The girl was dirty, hungry, and bleeding.The King had her washed, fed,  and bandages placed on her wounds. Then He placed a beautiful purple robe around her shoulders, and placed silk slippers on her feet. He declared through out His kingdom, that she was now His daughter,  a Princess, and was to be treated as one. The people knew that she was one of them, and treated her the same way they always had. She stayed away from them and listened to the words of love that her Father the King spoke to her.

One day a few years later, the Princess heard the children playing in the village and longed to go to them. Without much thought, she hurried out the door of the palace, and ran to where they were. They didn't recognize her, for she had changed in so many ways. he shed her royal robe, and her silk slippers in order to be more like them. Before she knew it, she was running and she tore her beautiful dress, and she was dirty and bleeding from falling in the hard dirt. she decided to go home to the Palace, but the guards did not recognize her and wouldn't let her in, the King however knew His child, and called her by her Princess name, and picked her up, fixed her wounds and held her close. She said to Him, I am so sorry for leaving, and disobeying your wise words, please don't be mad at me! He replied, You will always be mine, and the words I say are for your safety and good. Listen to me, and stay close and you will be well in every way. It took some time for her wounds to heal, and for her to realize how right her Father's words were to her. She had the scars on her knees to remind her of the hurt that comes when she didn't heed His truth.

We have all heard this story in some form or other, but the truth that rings through out the center of this tale is what our scripture for today says to us. Living in His presence, there is fullness of joy, and beauty for evermore. That's not to say that we won't skin our knees once in a while, but it is comforting to realize He is close, and is more than enough for our everything!


Posted by wholeheartedlady.com at 11:59 AM