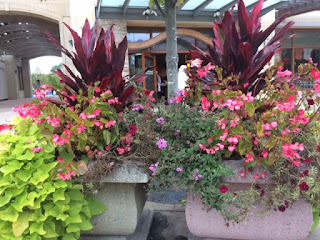 These flowers are holding on for dear life, but a few more days, I hope to be able to find them. October is banging on the door rather loudly at this point. Two more days, and we think about sweaters and pumpkin. I love to think about pumpkin all year round. I'm the one in the supermarket asking for canned in July.

This year is moving swiftly too, and in six weeks we will be electing a new President. I don't know what to think about that, except to say, My hope is in the name of the Lord, who stands forever! " The Lord is my portion, says my soul, therefore I will hope in Him. The Lord is good to those who wait for Him, to the soul who seeks Him. {Lamentations 3:24-25}Yes, I will vote for Donald Trump, because he is the best candidate, but I pray to the Lord to transform our nation. We need Him so badly and He wants to move here. Donald Trump won't be able to fix a thing unless God moves upon him.

I came upon this interesting verse in a book that I am reading called"With One Cry", by David Butts. "Return to your fortress, O prisoners of hope; even now I announce that I will restore twice as much to you. [Zechariah 9:12} David points out that the verses in this chapter refer to Christ's first and second coming. It just may be that Jesus is telling us to be diligent in prayer and hope in Him, for He will bring about revival. Amen! So be it!
Posted by wholeheartedlady.com at 2:21 PM