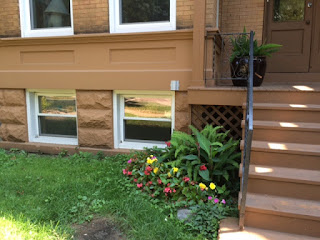 I hope you had a wonderful day. Here on Long Island it is hot and humid, which is par for the course in August. I went to my local beach to cool off, and the next two days the weather man said it will be extreme heat so much so that it is called an emergency! When this happens people are urged to check on elderly neighbors, and stay in air conditioning! This only happens once a year, just about as often as major snow storms.

What emergencies have you had in your life? Have you been stuck in a snow storm or maybe a cave? The verse for today was voiced by David while he was held up in a cave. Not our idea of a grand vacation! He was running from the King, oh, but wait, he was the King wasn't he? Not yet, God put him into the waiting room for a number of years, because it was necessary for his maturity. It didn't make him perfect, but it made him more like God than any other King of Israel. When the Jews were looking for their King who was to come, they addressed him as The Son of David. Jesus, Our forever King, will always be the One and Only King who reigns forever. Cry out to God and He will hear!

By the way, this is a picture of the front of the house where my daughter has an apartment. Not a big deal to anyone else but me. I just thought I'd share it!
Posted by wholeheartedlady.com at 8:28 PM