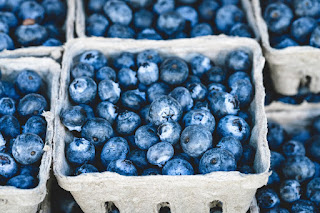 And the King assigned for them a daily portion of his own rich and dainty food and of the wine which he drank. They were to be so educated and so nourished for three years, and at the end of that time they might stand before the King. Daniel 1:5

Daniel and his friends had no idea what life in Babylon would bring. It wasn't their choice to live in a foreign nation. They were basically slaves with benefits. I'm sure life was better for them than other slaves, but everything was different.

The food, was new, so were the clothes, language, customs and gods. Daniel wasn't going to give in to the lifestyle that he knew wouldn't be the best. None of the Kings food would work for the four hebrew men. It wasn't going to noursih them as the King had hoped.

When the day came to meet the King of Babylon, no one could believe that these four were healthier, brighter, and stronger than the others. What was their secret? They were nourished by fresh fruits and vegetables. No secret, just good common sense.

It was the way of the hebrews, the way these young men were taught, and they never forgot the truth. As the years went by they were challenged many times. You and I are challenged with lies of this world much like Daniel and company.

The ways of our modern world might seem good, until we hold them up to the light of the gospel. Our modern world will try to lure us into their way of thinking by telling us if it feels good, do it. This is far from the truth that sets us free.

Let us encourage one another toward good works, and speech, thought, and deed. We won't stand before the King of Babylon, but we will give account to the one who made all things. This is a daunting thought, however, it is the truth.

How many years we spend on this earth, only God knows. Let us make them count for the kingdom of God. Ask the Lord to show you things you can do to make a difference. It may seem small, but "Little is much when God is in it." We won't know until we get to heaven the influence our lives have truly made.
Posted by wholeheartedlady.com at 4:51 PM