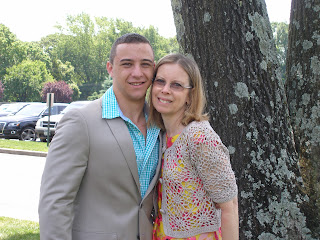 This picture is of myself with our son Matthew. It is on the day he graduated from High School. Five years ago I could never have imagined that he would now be ready to graduate College.

He wasn't a good student in High School. He was close to graduation before we knew if he would actually graduate with his class. Wrestling and goofing off was more his style. Immaturity was high on the list of reasons for this behavior.

More than once in the past five years he has told us things that he did in school during High School. We are so glad we didn't know about these escapades earlier. We had enough angst as it was! More than once we had to talk the school into giving him one more chance.

Daily prayer is responsible for his turn around. As he began Community College he became close to a professor who was dynamic and easy to listen to. He had a son who was a wrestler, and Matt him. They had wrestled together during the summer practices when our team from our small Christian School would meet with the Public School team.

This meeting wasn't by chance. God knows who to put in our paths to bring us into what He wants for us. Matt's grades went from barely passing to A's. He was inspired to work for what he wanted for his future.

In a month he will graduate from Stony Brook University with a bachelor's degree in International Business. Prayer has been the fuel behind his success. He will tell you that he worked hard, which he did. Without prayer I don't think it would have worked out as well, if at all.

Those things that we bathe in prayer bring the grace and strength of God into the picture. As I continue to pray, I believe God to complete the work that He began in Matt. God works in situations in ways we can never imagine. Who knew this Professor at Suffolk Community would be the springboard for Matt to succeed? Only God.

Questions or comments? I would be glad to speak with you. Please  text me at annrmig@gmail.com Love to you and your family!


Posted by wholeheartedlady.com at 8:02 PM