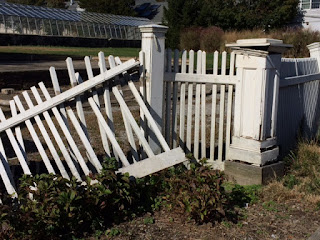 Why did I take a picture of a broken fence? It reminds me of a story on the Bible. Actually it is from Proverbs. "I went by the field of the lazy man, And by the vineyard of the man devoid of understanding: And there it was, all overgrown with thorns; Its surface was covered with nettles; Its stone wall was broken down. When I saw it, and received instruction: A little sleep, a little slumber, A little folding of the hands to rest; So shall your poverty come like a prowler, And your need like an armed man." {Proverbs 24: 30-34}

Someone has to be responsible to care for these things. When its important to us we do, when something is not so important we let it go. This is the state of our nation. We have allowed the liberal forces that be, to arrogantly be the voice of our Government. We have allowed our schools to teach that America is not such a good place. History is not important,  and may be totally neglected.

The good, caring America that I knew as a child is now being portrayed as divisive and self absorbed. How could history change? It has not, but our values have. In order for socialism to prevail, our national heritage has to blend into the background and become as any other nation in the world. This cannot be.

When America first became a nation, a french Patriot came to America to see how it could work. He found the reason the government was able to function was the faith, virtue,  and self motivation of the majority of people. He did not see any of this in other countries. Our government was set up on biblical values, with the people walking, living accordingly. No wonder the liberals don't want to follow the Constitution the way it was written!

You and I can make sure our fences are secure around our spiritual lives. Stand on the word of God in every area of life, and do not wavier. A godly army is rising up to stand for justice and truth not only in America, but in their personal lives as well. God's people being who God has called them to be can change a generation, and equip the next.


Posted by wholeheartedlady.com at 3:47 PM