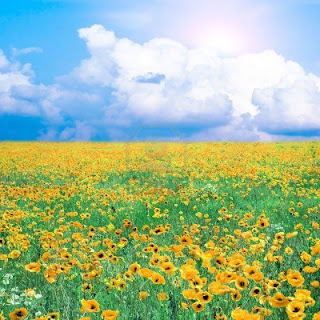 When I get to heaven I hope that I can have a field of flowers like this one, only I am sure it would be even better than this! A picture sets a mood, gives an idea and establishes a feeling, however it is never as good as the reality!

"Now I see but a poor reflection as in a mirror; then we will see face to face. Now I know in part; then I shall know fully, even as I am fully known." {1 Corinthians 13:12}

It is good to know that "what is to come" will be thousands of times better than what we already have. Sin has tarnished everything on this earth, making it only a mere reflection of the best. It wasn't always like this. In the beginning, Genesis, things were so much better with our world. No darkness, no fear, no worries about if you could pay the bills. Every need was provided for.  That is the way God wanted things to be, for all of us.

When sin entered, well you probably know the rest. What really matters is that when Jesus was sent by His Father, He destroyed sin and death! He took it out of the hands of the enemy, and fulfilled every dream and heart's cry of mankind. Sometimes it just doesn't seem that way. Because we are still here on earth, with the enemy of our soul. The battle has been won in the heaven lies, and so we fight to keep the perspective of heaven. Jesus said, "It is finished."

When He comes the second time, oh, it will be as the Victorious King, and the devil will be bound, with all his demons never to accuse us, pick on us, or lie to us again. He will be completely revealed as the snake in the grass that he is.

Posted by wholeheartedlady.com at 7:03 PM