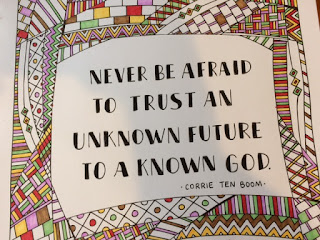 If we know God, then we can be sure of our future. This was said by a woman who suffered through the holocaust, in Germany because she and her family hid Jews in their house during the 2nd World War. As Christians, her Father and Mother felt that commanding that all jewish people be taken to camps was wrong. They were right, but it cost them their lives, except for Corrie. She lived through to tell her wondrous story, of hope and grace.

We wonder sometimes about why things work out the way they do. In Corrie's situation we might ask, "Why was she spared and her sister died?" She tells of the mix up of papers where she was released by accident, when she was supposed to be killed. God saw fit to let her go, and tell of how she read scriptures to all the ladies in her bunk. She gave hope to those who were dying and hurting. She remained strong during the most awful circumstances.

When we trust God, our lives are not our own. We belong to Him, and sometimes that means going through the fire. The miraculous part is that we come out on the other side. I think of the Prophet Daniel, who went through a real, physical fire, and came out not even smelling of smoke.

"When you pass through the waters, I will be with you; And through the rivers, they shall not overflow you. When you walk through the fire, you shall not be burned, Nor shall the flame scorch you. For I am the Lord your God, The Holy One of Israel, your Savior;    Isaiah 43: 2-3a