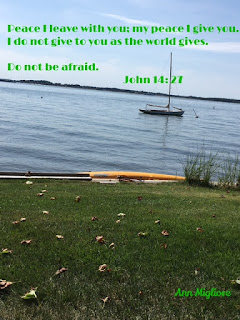 When I was a teen, I longed for stability, but I had no idea what strength like that looked like. Then I came to know the Lord. It seemed as if I immediately gained strength, and my grades in school showed it. I was no longer riddled with fear, but it was still a hinderance in my life.
When  someone would mention fear, a myriad of thoughts hit my mind.  sometimes it was just that sick feeling in the bottom of my stomach.

I attended Dowling College, and I didn't know anyone. There were a few students from High School that I said hi to, but not much of anything else. While I was becoming acclimated to the campus, a guy comes up to me and starts talking. We made some light conversation and that was it. He looked for me after that, every day. I could not get rid of him. No matter what I said, he wanted to talk more. Later I found out that being rejected by a girl can cause some guys to a challenge of the pursuit. Oh, great. Now I was not only getting used to college, I had a cling-on, who was very persistent.

He was more that just persistent. He found my phone number in the school records, and called me at home. This was now more than weird. I was afraid, but somehow I found out that the school nurse was a christian, and went to see her. She knew who this guy was and she gave me some very good advice. She said,"Do not cast your pearls before swine." Matthew 7:6  I certainly wanted no part of that! I wanted to be a good godly witness, and bring him to the Lord. He wasn't interested.

I was a young 18 year old who wanted to be nice to everyone. I learned that not everyone should gain my attention, and certainly not everyone should be in my face! Fear led me to leave the college the following year, and God used that in my life anyway. I can't believe how naive I was! Looking back I should have gone to the school authorities and had him arrested for stalking. As a young person, I would never do that to someone. It never crossed my mind. We didn't even know what a stalker was in 1977?  My point is, look back to see how far you have come, never to judge how foolish you were. Fear can take sound thinking from us, and wisdom can be shut out. Don't allow it to trap you into a corner. There is always a way out! God, who is the master planner knows before any situation happens how to lead us to greener pastures.


Posted by wholeheartedlady.com at 7:45 PM