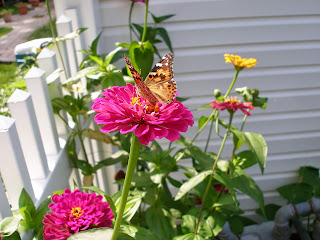 Soon there will be flowers where snow once was! Change seems to be coming faster than it ever has before. Is it because I'm getting older, because I'm pretty sure it hasn't sped up? To be sure, if you don't like today, tomorrow is right around the bend. When you serve God, you know that hard times will come, but He brings us through them, not around them, and then comes the victory. Jesus knew this would happen to Him. The cross and then resurrection, the thorns and then the crown. I'm sure He was beginning to feel the weight of the cross at this point in scripture:

"I spoke openly to the world. I always taught in synagogues and in the temple, where the Jews always meet, and in secret I have said nothing.Why do you ask me? Ask those who have heard Me what I said to them. Indeed they know what I said."      {John 18:20-21}

Jesus could see clearly that He was being set up! The Jewish leaders want Him arrested, but He has done nothing illegal. He says to them, Really, you are going to arrest me for the things that I have said out in the open, for everyone's hearing? One would think that He could have said, why arrest me now? He knew why it was upon Him, because it was His Father's perfect time. This was the event that all of heaven had waited for, not with joy but with mourning. The angels may have said, "Will the Father really allow His Son to be crucified?"

Jesus always knew His Father's plan, and He knew that no one would stand with Him. He also knew His Kingship, and His kingdom was not of this world, as we read a little further in John chapter 18. I find it strange to read that the Jews didn't go into the praetorium since it was not "legal" and then they wouldn't be clean to eat the passover? But they were right with God? Even though they sent an innocent man to His death? What kind of sense does this make? None, at all, but their eyes were blind. They didn't feel they needed a Savior, because they followed the law, and that was good enough. Truly, they did not see the one and only God, standing before them!

Father God, Help us to see you in every circumstance that you put before us. We don't want to be in the blind camp, we want to be among those who see! May fear be far from us, and let faith reign over us. Let us be full of your Holy Spirit, and capable for every task that you give us. During this celebration of your resurrection, let us glorify your name. Amen.

Posted by wholeheartedlady.com at 12:52 PM