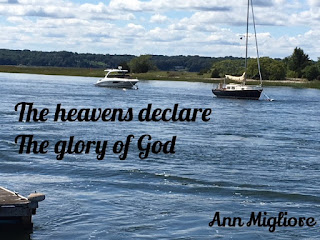 When I look into the sky, it reminds me of heaven. I don't know if everyone thinks that way, but I do. One of the reasons is because it seems to go on forever. I guess it really does do that. Where does it stop, or where do we begin? It is all a mystery, for now. When the time is right, He will sweep us up into his arms, and bring us to His forever Kingdom.

"But of that day and hour no man knows, "Jesus said. {Matthew 24:36} So if someone claims to know "the day and hour" they most likely are wrong. What we do know is this: We know the signs of the times. We know that our culture has pushed God out and tried to block anything that has to do with Jesus. We know that many children don't know who Jesus is, let alone what He has done for them. Adults don't know who he is, or how important he is to a just society. The ten commandments are treated like a relic from the past, and the history books don't even exist in some places. If they are available to students there is no reference to the God who raised up our nation.

How did we get this way? One day at a time. The christians were told to stay out of the public arena. Secular thinkers filled in the gap. But God is on the move, as He always is. If we look at Hollywood recently, people are horrified by the antics of Harvey Weinstein, and are throwing him out of power. All these years he got away with harassment, rape, and all sorts of evil, and now the line has been drawn. Thank God! Although there has been little acceptance when a christian says, "this is wrong," those same people are coming out and saying"This is wrong."Hallelujah.

Science now can prove that life begins at conception, so we need to pray, that the blinders come off of those who still proclaim that abortion is a good thing.Those women who have been damaged by abortion need to be heard. Pray for the voices of God's people to come forth, and open the ears of the deaf, the eyes of the blind, that Good will once again reign over our country. If we had to name one thing that has grieved God's heart about America it is the evil of abortion. Does God still save? Yes, He does. Can He redeem our land from evil, Yes, He can. He is a good good Father!
Posted by wholeheartedlady.com at 6:49 PM