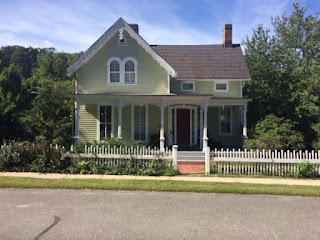 "In him you also trusted, after you heard the word of truth, the gospel of your salvation; in whom also, having believed, you were sealed with the Holy Spirit of promise. "  Ephesians 1:13

As a child I lived only a few miles from this town. We loved to come here to feed the ducks at the pond, or walk near the shopping area. The Long Island Sound was near, but it was a sleepy, place far from the busy city life. It still would be except that the largest University in the New York State system is smack dab in the middle.

I got saved at a small church not far from here. I was in High School, and I had no idea that Jesus was alive, or that he cared anything about me. My friend Debbie wanted to go to this place called Pinecrest, so I went because she did. I did not know that God had planned for us to find him there.

It was not your ordinary church. It was a large house that was added on to several times, to accommodate more people. The music was just a guitar, and a singer, and the Pastor used his bible to speak from. I had never heard the bible used in a church before.

My mother took us to the Presbyterian church on occasion, so my exposure to such things was limited. I could not believe that these people actually believed the words of the bible, but then
I didn't know what the bible said. I was sure that I would never go back there and was glad to leave.

Debbie had other plans. She thought the whole experience was wonderful! How was I going to get out of this, I wondered. Before I knew it, we were on a retreat at this place. All of my fears melted away after a while, and I knew that Jesus loved me. I  surrendered my life to him, and it was the best decision I ever made. Forty one years later I still serve him.

This verse of the day solidifies what God did in my life. After a few years of reading and studying the bible, I realized that He had sealed me, with his Holy Spirit. I didn't have to fear falling out of his hands, or that sin would overtake me because He made provision for me. He sealed my life, so that I would be forever his. This may seem to some as a unbelievable story, but it is not. It is God's truth from his word. I believe God!

Posted by wholeheartedlady.com at 8:50 PM