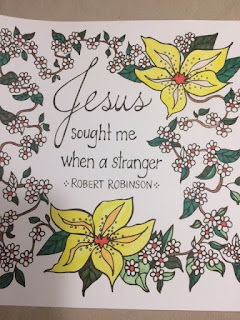 This is the crux of the gospel message! Before I knew Christ, He wanted me in His forever kingdom. That may sound a little like a fairy tale, but so much of the truth is somewhat hard for our natural man to understand. Many of the Tales we know of today were originally a story about Christ and His Church. A love story told in a earthly form, but with a spiritual meaning.

Cinderella is a good example. The lowly orphan girl who is rescued from the mean step mother, and given a kingdom where she rules with her Prince. Snow White, who is under the power of the wicked witch, and is rescued with the kiss of the prince. Many women today do not relate to these because they were told that the prince is a man, not the Lord Jesus Christ, and because they don't need to be rescued because there is nothing wrong that they need to be rescued from. The devil is a liar.

All of us, man, woman, child, old and young need to be released from the power of sin that rules over us until we ask Jesus to be Lord. He has broken the power of sin and death so that we can experience all that He died for. If we would just realize a tiny bit of the freedom that He won for us, we would praise Him for ever!

As we seek after God's heart, He gives us a new and better heart that will shine with His glory and draw the needy to Him. Lay down your cares, fears, and worries at His feet. He has already paid for them so there is no need to carry them any longer. You will feel the weight lifted off your shoulders, and in an instant you can be changed, restored and made whole! He will rejoice with you because He loves to see His ladies set free!  Be blessed, healed and made whole!

Dear Heavenly Father, As I pray for my dear sisters, I ask you to move upon them as they read this. Let your love fall upon them as a gentle mist, and may they see your face. Help them to grasp your hand, put their trust in you, and receive a victory over those burdens that weight them down. May they be released in Jesus name. Amen. " Grace and peace  be multiplied to you, in the knowledge of God and our Lord Jesus Christ, as His divine power has given us all things that pertain to life and godliness, through the knowledge of Him who called us by glory and virtue. By which have been given to us exceedingly great and precious promises, that through these you may be partakers of divine nature, having escaped the corruption that is in the world through lust.  {2 Peter 1: 2-4}
Posted by wholeheartedlady.com at 7:06 PM