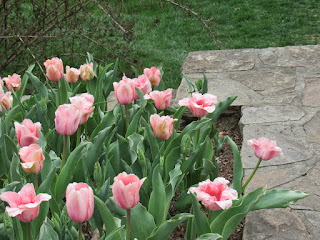 Today I have a true tale of my Mother's life. She actually wrote about it in a journal that she was a part of when she lived at Leisure Village in Ridge N.Y. She called it "The Consolation Prize"
Marilyn, her younger sister and only sibling was getting married. There was much rejoicing and celebration, and my Mom who had just broken up with a steady beau, was lost in all the excitement.

My Grandparents wanted to get her away from this scene, and they booked her on a six week tour of Europe, by herself. That didn't go over very well with my mother, and she protested, but finally went. She cried as the ship left the dock in 1952, but she made friends quickly. Europe was beautiful and fun, even though Germany was still in ruins from the War.

They toured the countryside in buses, and Mom was really excited when they came to France. She had graduated from college with a degree in french. Now she could communicate with the locals and not wait for an interpreter! They stayed in an elaborate hotel and were told that there would be a formal dance that evening. Alright, that could be fun she may have thought.

All the American girls dressed appropriately and came into the ballroom. Not as a whole gaggle of geese, but you know as they were ready. Mom was a little socially awkward, and I can't imagine how I would have felt in the same situation! They began to mingle with the others there. One tall young man came over to her, and asked her to dance. He was very quiet accept to make known his displeasure with how American girls danced! He thanked her for the dance and escorted her back to her table.

Well, that was different, she said to herself. The next morning as she was packing to move on,  she noticed a few very  official  cars with flags flying from them.  The young man that had asked her to dance got into the back seat. She asked one of the employees at the desk about the mysterious man. Oh, that man? You don't know who he is? That is Prince Rainier of Morocco they said. I think my mother may have wanted to faint at this point! She told the others in her party who confirmed that this man was he.

So what is my point in telling you this story? I think that God can surprise us with something special just to make us feel special. My Mom didn't know the Lord then, but I know that He will do things even for the lost, that show them of Himself. And Mom told that story to all the family when she got home. Maybe some didn't believe her, but I think God wanted to lift her out of the everyday with something that not many could boast of.


Posted by wholeheartedlady.com at 9:24 PM