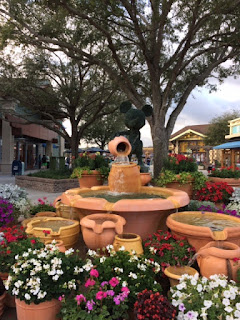 This is a scene from Disney in February. I went all over taking pictures. I even heard someone in the crowd say, "look at those tourist taking pictures of flowers!" It seemed too basic for them to consider picture-worthy, but to me, it was glorious! One man's treasure is another man's trash, or maybe just alright. Anyway, it is 64 degrees and rainy in N.Y. It says June on the calendar, actually the 5th to be exact.

Jesus is coming very soon. What makes me write this? Look at our world today. Terror attacks all over the western world. They seem to come out of nowhere, but then research after the fact finds that there were signs. We need to read the signs of the times, and be vigilant about sharing them, in love so others may be saved. Have you ever seen anything like this? A news reporter said yesterday that we have to remember that militant Islamic terrorists are not looking for peace over all, like the rest of us, they want to kill us.

That doesn't bother me any, because we, as Christians have always had an enemy, and he wears different hats in various generations. This one happens to be more intense than any I have ever seen. Is God faithful to be with us in the storm?  Even babes in the Lord know that He is. Justin Bieber, a popular singer among youth said during a benefit concert in Manchester England, " God is good in the midst of evil." Can you believe that he would say this? You never know what has been planted inside. He was raised by a Christian Mom. Bring your word forth Dear Jesus!

Those who will listen will be comforted! The Spirit of God is near to all who call upon Him. He is waiting, because He wants every last soul who will listen and trust Him to be saved! Pray for your loved ones, and neighbors to come into His Kingdom. Know that He is good, no matter what the situation that man has allowed to come about. Jesus is a gentleman, and He won't come unless asked. Call upon Him today!

Posted by wholeheartedlady.com at 11:42 AM